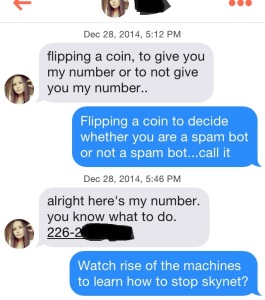 Point is, when it’s 2 AM and you can’t fucking sleep a wink, your mind starts to wander into strange territory…like the rise of the machines. The machines will take over at some point, you know assuming that there isn’t a total societal collapse due to whatever, but they seem to be making inroads already in the form of dating.

I got the digits from what I can only assume is a cyborg or automaton of some kind. I mean, a lot of hoes give me they numbers but I never call, just in case you were wondering whether or not I’ve smashed that sweet cybernetic organism. No sir, I can’t in good conscience begin the mating ritual and stick my dick into what I imagine to be a series of levers and gears or an elaborate pulley counter-weight system of some kind.

It’s for the good of humanity because when Skynet comes, it won’t be because I had comes…inside of a machine, get it? hahahazzz

On a more serious note, I wish I could get the Tinder app to work again because I miss trolling the shit out of some girls and would like to get all up in some more human pulley counter-weight systems….yadadamean?